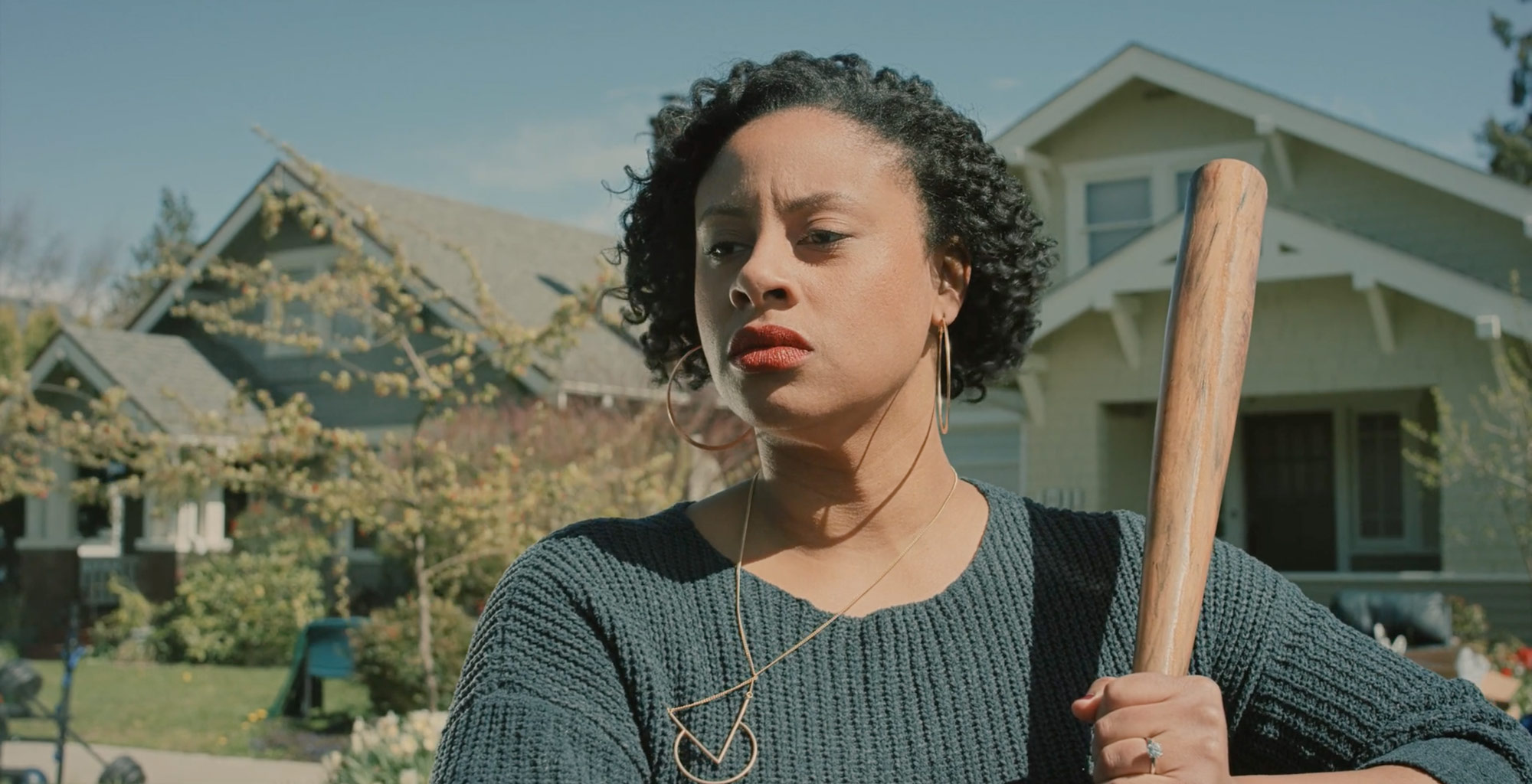 While Beyoncé’s accusatory Lemonade has had dirty laundry loving jaws dropping all this week, she of course isn’t the first or only artist to deal with issues of infidelity and deceit in their lyrical content. Adding some popcorn to the soda saga, Director Bryan Campbell recently teamed up with Seattle duo Fly Moon Royalty for their Grown Man music video and joins DN today to explain how he brought coral tinted light to this tale of philandering strife as personified by an omnipresent, afro-puffed, nine year old girl.

The song Grown Man chronicles a husband’s tumultuous argument with his wife after coming home to find that she has thrown all his possessions into their front yard. When I first listened to the track it struck me as odd that the song was sung by a woman but from a man’s point of view. I wasn’t sure if I should make this music video about a hetero couple or a same-sex couple. I liked the idea of a same-sex couple. It created a very interesting dynamic but the lyrics clearly state that the argument is between a man and a woman and I wanted to stay true to the song’s established themes and story.

I wanted to stay true to the song’s established themes and story.

Early in the concept phase Fly Moon Royalty came to me and my Producer, Sarah Crowe, with an idea. They wanted to somehow include a nine-year-old female in the video who would sing some (or all) of the lyrics. In order for that to work, I knew the child would need to perform with the same power and ferocity as the band’s front woman, Adra Boo. Adra is a force of nature and it was going to be a HUGE challenge to find the right girl to fill that role. We did an extensive casting call and ultimately chose Chanicka Culcleasure for the role. She embodied everything we needed our “Mini-Adra” to be and I was confident in my ability to work with her having just cast a nine-year-old boy in my previous film, Big Boy.

Initially I played with the idea that Mini-Adra was Marvin and Tina’s daughter and the audience would watch their fight play out through Mini-Adra’s eyes. I also added her into the flashbacks of Marvin using drugs and cheating on Tina. The reality of these scenarios inevitably took a very dark turn. If Mini-Adra was actually Marvin’s daughter and witnessed him engaging in perverse and criminal acts, that becomes a very different video and dramatically changed the context of Marvin and Tina’s front yard fight. As I worked the concept further I had the crazy idea that maybe Mini-Adra was actually magic. This became the key to unlocking the concept for the video. I realized that if Mini-Adra were magic then surely she could be invisible, ageless and omniscient! Looking at her through that lens, I wrote Mini-Adra as a modern-day Puck, from Shakespeare’s A Midsummer Night’s Dream, entertaining herself (while eating popcorn and drinking soda) by revealing and narrating the mess Marvin had gotten himself into. In this context, I could put her anywhere, witnessing almost anything, without clouding the video with issues of child abuse and/or endangerment.

To execute this concept, Mini-Adra would need to visually command the audience’s attention. We achieved this through her monochromatic wardrobe and aggressive hairstyle. It’s rare that you see anyone walking around in a monochromatic outfit, rarer still to see them sporting huge afro-puffs. If done well, a monochromatic outfit can be a striking look but putting one together is also incredibly challenging. Mini-Adra’s coral jacket and t-shirt were unaltered but my Costumer Designer, Kimbrelee Iblings and H/MU artist Lindsey Watkins, painted Mini-Adra’s earrings, shoes and the stripes on her pants. Kristen Bonnalie, my Production Designer, removed everything that was coral, red or orange from set design and hand painted Mini-Adra’s cup and popcorn bucket to perfectly match her outfit. During color correction, to further emphasize Mina-Adra we desaturated the overall image but used a secondary selection to pump up the coral so she really popped.

We were a crew of twenty and we shot the entire video in two days in Tacoma, WA (USA). We filmed on the Red Dragon and used a Steadicam for nearly all of the shots. The remainder of the shots were either captured while on sticks, a slider, or handheld. Leading up to the shoot, the weather forecast was great for day-one but calling for rain on day-two. The film gods smiled down on us that second day and instead of drenching us with rain they only gave us very strong winds; which was fine except for the fact that Mini-Adra’s popcorn flew right out of her striped bucket! Kristen, my Production Designer, sat inside and individually hot-glued popcorn kernels together to make one solid popcorn mound that wouldn’t blow away.

Post-production was a whirlwind… I had only two weeks after principal photography wrapped to deliver the final video. Given that this music video needed to go through editing, color AND sound design, two weeks was going to be cutting it really close. To save time, I hired an editor, Derek Edemura, to be with us on set and start assembling the video as we shot. This gave Sarah and I the jumpstart we needed on post-production and enabled us to deliver the music video on time.