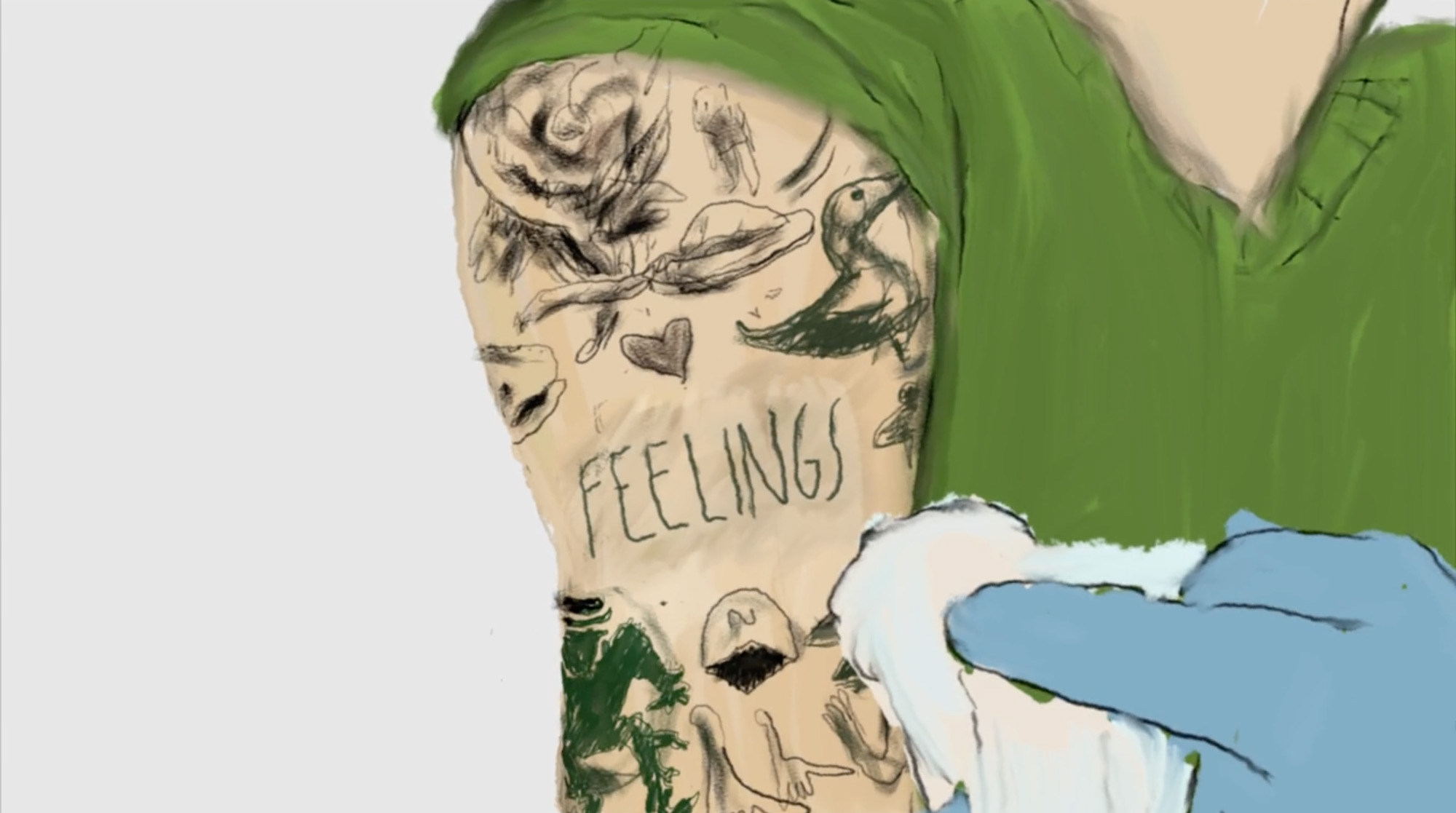 “I have some pretty freaky dreams when I'm manic. These are some of those dreams.” Nate Milton shares the cathartic creation of his animated shorts duo, ‘Feelings’ & ‘Delusions’.

It’s been long accepted that the act of creation often brings with it an emotional catharsis which has provided a rich sanctuary for the world’s artists, who in turn bestow works which speak to the mix of joy and pain that is the collective experience of being human. What appear to be on their surface a series of unconnected animation exercises, Nate Milton’s spiritual sister films Feelings and Delusions, were in fact born of the opposing ends of the filmmaker’s experience with bipolar disorder. DN sat down with Nate to discover how he transformed emotional experience into animation.

Both Feelings and Delusions have a stream of consciousness feel to them. Where did these non-sequitur films come from?

Feelings was made when I was in a depressed state. Animation for me has always been a cathartic process since I was a little kid. The repetition of it really calms my brain down. I had been pitching a lot for directing jobs and failing and I was sick of linear storytelling. So the little ‘snapshot’ style of Feelings was born from that. Just drawing anything that came to mind that made me feel good. The first few shots came from a poem I wrote, which felt very fake written down, but when I drew out the imagery it made sense, and I just went forward from there. I have bipolar disorder, and I’m more often very manic than depressed. So Delusions was born out of a manic episode where I completely and utterly lost my mind for a week and ended up in the hospital for a few days in Rhode Island where I grew up. I think Feelings was designed to make the audience feel my sadness from nostalgia or sort of loss, and Delusions was geared towards taking someone on a trip to the other side where say aliens blow up SeaWorld.

Whales are a focus in both pieces, especially Delusions – do they hold a particular significance for you?

Yeah I have a total thing with whales. My older brother was obsessed with sharks growing up and we painted the basement walls all ocean scenes with my mom. So it probably started there. It has a lot to do with scale too, just how big they are. I’m absolutely terrified of the ocean, but I love the ocean so much too. I guess in the same way I love horror movies. It’s so terrible that they are all dying too, it breaks my heart. A whale washed ashore when I was living in California a few years ago. It was pregnant and got hit in the side by a giant commercial ship. It swam ashore and hemorrhaged and gave birth. My friend drove me there the next day and it was a super sad scene. So that, and the fact that I just hate SeaWorld, made it into Delusions.

Yeah I have a total thing with whales.

Are the segments driven by any particular techniques you want to experiment with?

I think maybe with Feelings I discovered that I like to use first person perspective a lot. Which, hopefully this doesn’t sound pretentious, to compare it to poetry again, if you use the word “I” it puts the reader into that perspective. And so you can write from first person experiences and the audience can either share your experience, or apply their own experiences to that image. It makes it kind of instantly immersive. It happens naturally in books and movies just by establishing character anyway, but this is sort of mainlining the experience in my opinion.

What is your working process as you move through production?

Process wise I hadn’t really animated in Photoshop before, so for Feelings, I was experimenting with the kind of ‘wet brush’ coloring. I used the illustrator Kyle Webster’s Photoshop brushes, which I kinda wish I did for Delusions too. I just finished a big job all in Flash in April and I was psyched on how fast I was working, so I wanted to try it for a film. Then it’s just importing the frames from Photoshop or swfs from Flash into After Effects and I have this ‘wiggle’ adjustment layer that I throw over everything, and then edit in Premiere. Each short took about a month to complete on my 2009 MacBook, but I work in bursts.

Given the standalone nature of each segment how do you approach building the order in the edit?

I’m a weird editor. I know the basic rules and I’ve worked a fair amount as an editor. But for stuff like this, I generally just cut to music to get a rhythm to the rough edit and then do another edit to the final music. If you cut things on a rhythm, it doesn’t matter what music you drop behind it, it’ll always play. I had a teacher in college play the scene in Grease, Grease Lightning with the sound off, and he played 99 Problems by JayZ under it, and the whole class had our mouths on the floor. It was perfect. The ordering of my shots is very impulsive, it’s just stacking images. On Feelings I made all the shots and then built an edit over a few days and for Delusions I made the shots in that final order. I had my friend O.B. Howard put that song together early, so I already had it in the timeline while I was working. So I would just add the shots in and close my eyes and imagine what was next. I had a little list going of what I wanted in there.

Not wishing you to swing back to either emotional extreme, but will we see a continuation of this series, and do you have any other work in the pipeline?

There definitely will be a trilogy, there are ideas brewing. I have a producer friend that said he wanted to order ten of them, but I think he was kidding. Work-wise I just animated and designed 10 little episodes for an animated interview series for Jazz at Lincoln Center that Patrick Smith directed. Those were fun and I think are coming out online somewhere soon. And I also co-created/wrote/directed a sci-fi web series about a retirement home in space that’s in production now. The group Cartuna is producing those, and I think the series is launching online this summer.