Ninian Doff is the winner of the UKMVA 2014 “Best Choreography”, the UKMVA 2013 “Best Indie Video”, he was selected for Saatchi and Saatchi’s New Director’s Showcase at Cannes 2012 to name only a few! But, most recently adding to Doff’s strong body of work comes the official music video Love Again for American hip hop duo Run The Jewels. Coupled with production company Pulse, Director of Photography Rod Clarke and talented Editor Paul O’Reilly, prepare to be blown away by the unique idea and masterful shots of personified dope rapper insects committing beat matched untoward acts. A cross between a nature documentary and Sir Mix-a-Lot’s Baby Got Back (I hope he doesn’t take offence at the latter), it’s not hard to see why this young man from Scotland is taking the independent filmmaking industry by storm. We have featured the ridiculously talented Doff before, and know that he never fails to create a film that transports us out of our world and slips us into his Doffian universe, a universe which opens our minds to the versatility of modern filmmaking, an inspiration to us all, you need to see it to believe it. So here you go…

Your DoP Rod Clarke has a ton of wildlife shooting experience, including 20 years filming for David Attenborough, so more than perfect for this project. How did your collaboration come about?

My producer, Rik Green, started getting in touch with nature cameramen as opposed to “regular” DOPs. This isn’t just a few cutaways of insects but every single shot is an insect, so it was really smart to approach this as a nature documentary rather than a music video. We travelled to Bristol (England) where the legendary BBC Nature department and crews are based and shot in a small studio with Rod and Nik the “insect wrangler”. Rod is a well spoken English gentleman so it’s pretty funny to have him shoot a RTJ video! He did hear the track and concept in advance so knew what he was a part of and actually got really into it – kept suggesting even more sexually suggestive flowers we could use!

Clearly this a shoot dictated by macro photography, what restrictions/demands did that place on your selection of equipment? Were there any lessons learned you wish you’d known beforehand?

This was part of the reason it was exciting to have Rod Clarke come on board. In the 90s he shot a Nature TV series called Alien Empire in which he had bespoke macro lenses built in order to get unusual shots of insects. What this basically meant was he owns hyper detailed macro lenses which give the look of wide angle lenses – when shooting a insect based hip hop video that couldn’t be more perfect. We shot some stuff on more traditional macro lenses but the moment he showed me a shot through these bespoke lenses I was like “we’re never leaving that lens” ha ha. It’s an insane bit of glass.

Patience definitely must have certainly been a virtue when filming this. Was there anything you could do to make shooting the insects easier and prevent them from buzzing round the room?

Initially we were planning a 1 or 2 day shoot thinking that’d be ok but all the advice we kept getting from experts was “give yourself lots of time”. So by having a tiny crew (just 4!) we could stretch the budget to let us shoot for 5 days and believe me we shot for every single minute of those 5 shoot days! We really needed it, couldn’t have made this in less time. There were a few tricks to keep the insects calm – keeping them cold is the main one. A cold insect will sit around twitching its wings as it warms up which is great for filming. But literally the moment they warm up they’re off. Quite a lot of the shoot was spent running around the studio with giant butterfly nets trying to catch escaped cast. 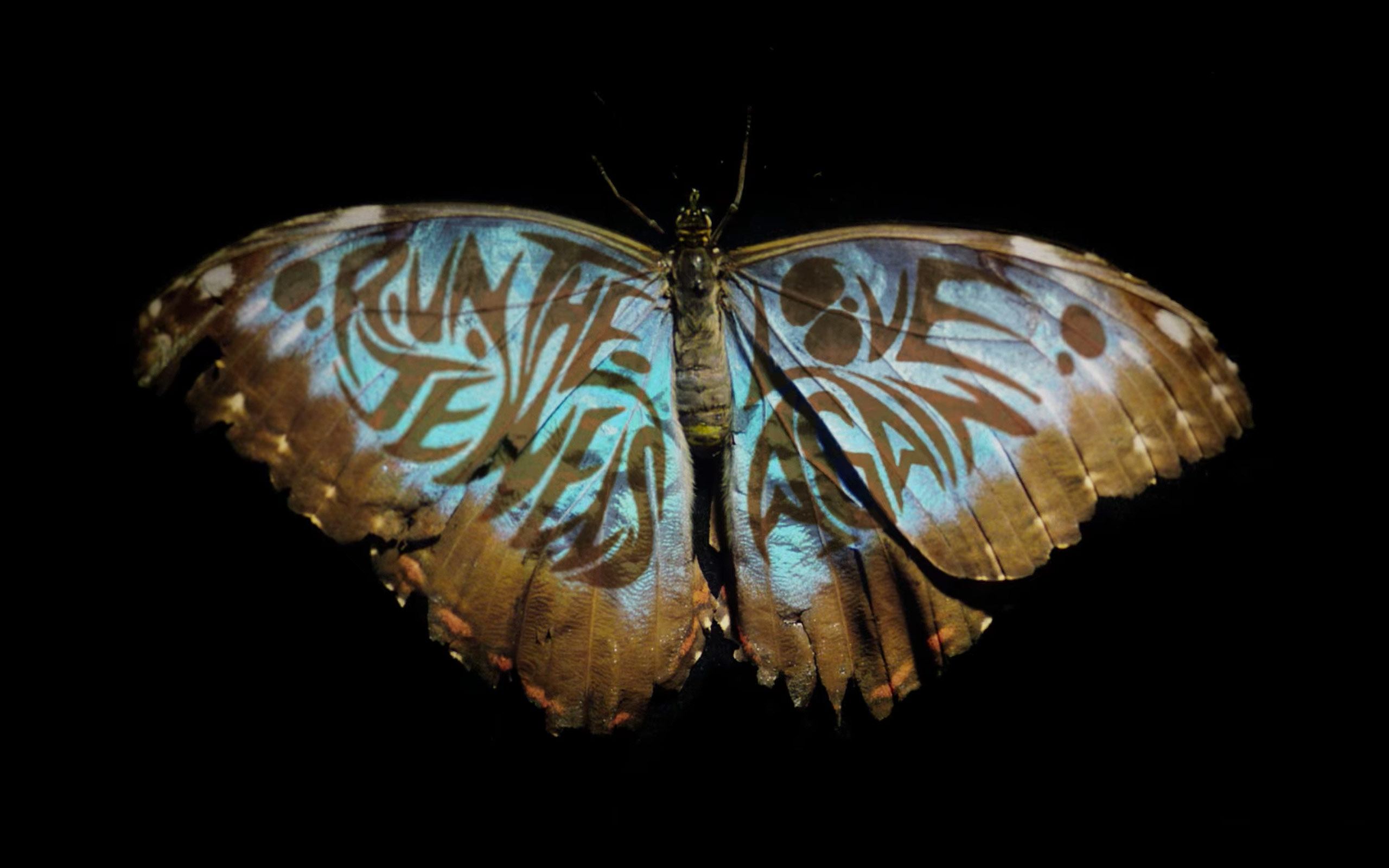 It looks like some ultimate sacrifices may have been made while making Love Again – what was the on set death toll?

Ha ha! Interestingly you’re the first person to ask this whereas I thought I was going to get tons of hate mail about it! Yes I send out all my thanks and respect to the flies that died for their art. True heroes. As a vegetarian nature lover myself I definitely had some moral debates with myself when writing the idea and planning the shoot. But ultimately, although it’s edited like a music video, this is a documentary – it’s all natural behaviour being observed. Every fly you see get eaten walked straight into those traps of free choice, we didn’t force a single one or throw them in. So it is just nature doing its thing. Interestingly, no one seems that upset by tons of flies getting eaten yet a few people go “oh” when the see the bee get munched. I think it’s funny one seems much worse than the other. (Although actually the bee and butterfly you see in the trap actually had already died of natural causes so we just put them into the plants mouths). It was a great shoot for venus fly traps though! They got really well fed! We had multiple plants so everyone took one home as a shoot present. Here’s mine enjoying her well earned retirement. 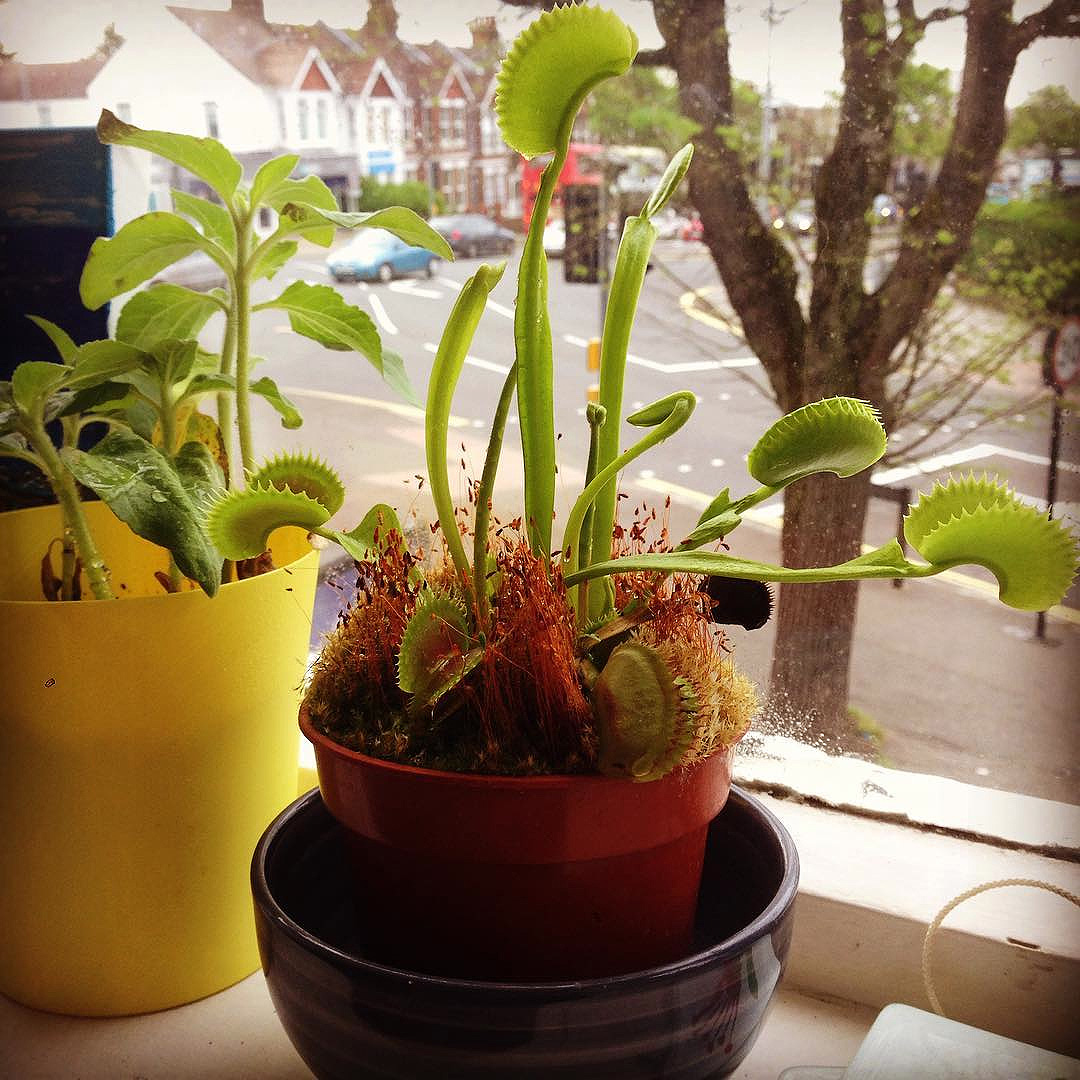 The choreography of your insect stars is in perfect step to the track, but I know that your detailed storyboards led to 16 hours of rushes for this 4 minute video. How did you and editor Paul O’Reilly organise, select and then assemble the raw footage into its final form? How long was post and was there a need for any additional VFX work?

Yeah this was a mammoth edit – big props to Paul. So I did storyboard this very closely to what is the final video, and make an animatic in advance too, but at the end of the day, insects take no direction and can’t be trained so it’s the editor who has to make these shots of insects twitching and cleaning themselves feel like they’re showing the performances and emotion I wanted. The edit actually kept getting harder – the butterfly verse came together quite fast, then the bee verse got trickier but had a breakthrough when we found this moment where a bee was grooming himself as suddenly it felt like he’s trying to brush his hair quickly to look sexy for the flower as it’s turns round to him. But the final fly and venus fly trap verse took a lot of work. Making the fly trap feel like it has a strong alive presence and finding the few seconds (literally seconds) of fly behaviour that feel like it’s reacting to the scene. Paul really dug into that and made it work. I’m really happy that the VFX on the insects is really minimal – I always wanted to try and shoot this completely for real. There’s only one shot of the bee face on where we just enhanced its heavy breathing in post and made his antennae move more obviously as the shot was too lifeless, but other than that, it’s all real. Even the bee’s lipsync is just a weird mouth twitch the actual bee suddenly did!

You recently embarked upon your first feature project. What can you tell us about it? Do you feel apprehensive about making the transition from shorts to features?

It’s a pretty insane comedy horror set in the Highlands of Scotland. I wrote the screenplay over the last year and I’m really excited about it now becoming a film, I think it’ll be a lot of fun. Making feature films is a big ambition of mine and so I can’t wait. I feel like all the short form work is great training and experimentation for larger work. A lot of my music videos are more short films than traditional videos so gave me a chance to keep learning and experimenting.

Will we see any new short form work from you before the feature drops?

Oh for sure. I make commercials too so working on some of them and, not sure what exactly, but there’ll definitely be more music videos too. I really love music videos and so it’s important to me to keep making them and pushing myself in that field. I think they’re a really special medium – super creative and open minded but with a massive potential audience. My advice to all aspiring directors is not to dismiss music videos!