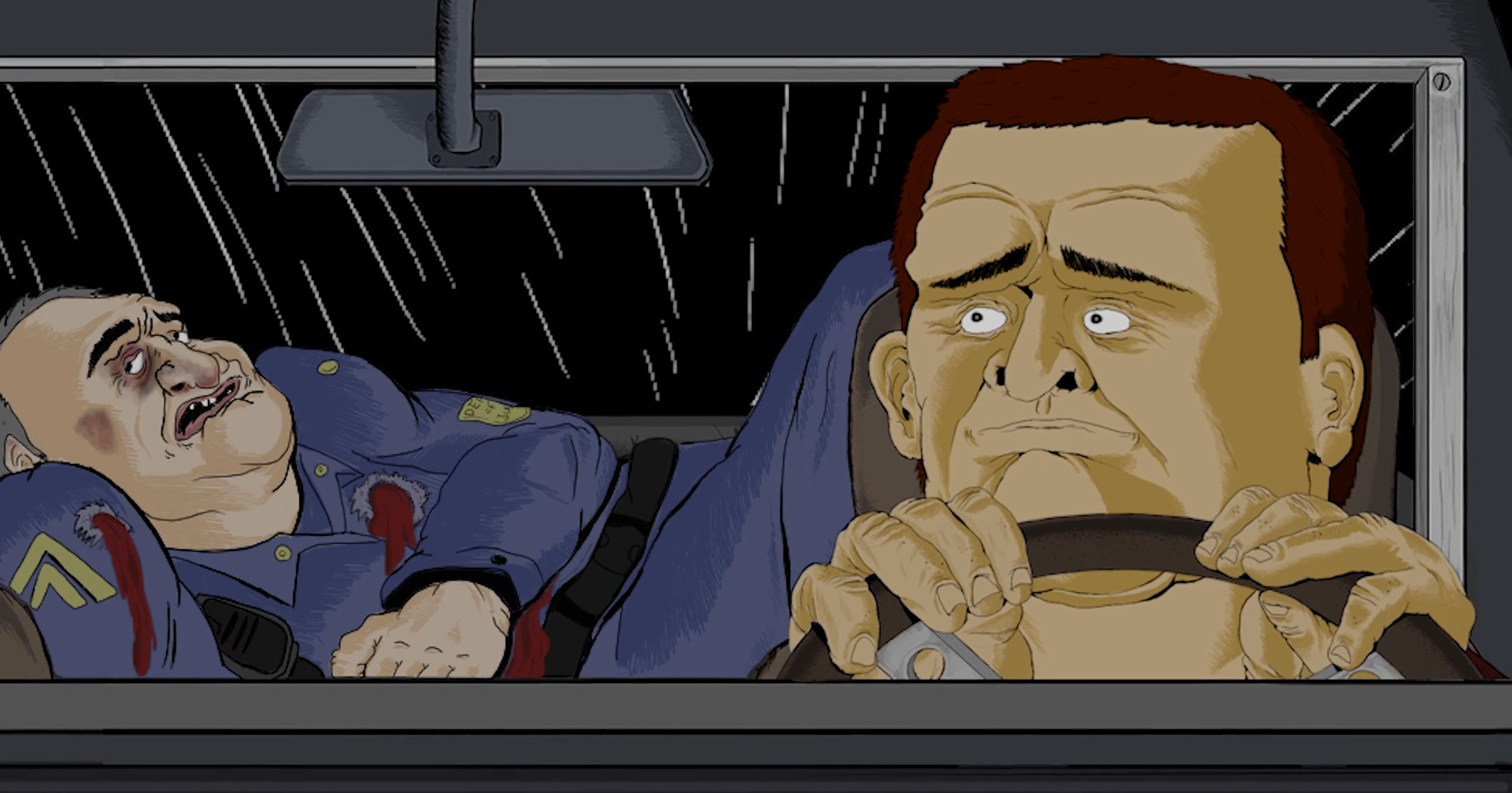 A student of Experimental Animation at CalArts School of Film & Video, Noah Malone’s work combines a strong sense of style with distinct character design to produce films suffused with an unusual and curious tone. His most recent film Help! Dying! taps into that berating voice from within, the one which plagues us when we avoid doing the right thing until the weight of conscience forces us (for the most part) to do good. DN sat down with Noah to discover how the theme of selfless acts bound Help! Dying!’s stranger moments together.

Your films have such a distinct style, the character design being a major contributor to this. Where was that born from and how have you developed and refined it from project to project?

I have been drawing this way for a while, and I think for now it just develops naturally as I keep doing it. Creases, wrinkles, and exaggerating the blob-factor in characters is an ongoing pursuit. Over time, I hope to gradually be more subtle with these techniques.

You describe Help! Dying! as ‘A love of self expanded outwards toward others who also love themselves’. What sparked your interest in developing a film around that concept? Do you consider yourself the kind of person who goes out of their way to help others?

This concept came after the storyline. The events needed to be tied together with some kind of ethical message (hence the monologue in the last scene), so I think the theme of helping a stranger came into the picture at that point. I am not sure how much I go out of my way to help everyone on the moral spectrum, but hopefully I am at least available to friends and family to chip in when needed. That being said, if someone was on the ground bleeding outside of my window asking to be taken to the hospital, I definitely would do it.

What was the foot sucking all about? Do you have a foot fetish?

Good question! No foot fetish that I know of, maybe deep in there. Really I just animated the action because it was very strange to look at. It’s interesting how contorted, or even graceful, one has to become to perform this ritual.

The decision to record the film’s sound on your iPhone, specifically in a car is pretty unorthodox. What led you to that set up?

Normally I borrow my roommate Isaac’s Tascam microphone because he is a music student, but I believe it was being used for something else at the time that I needed to record. I prefer the nicer equipment but I switch back and forth between iPhone and “real” stuff. I think for me it does not make a big difference as long as there is enough background audio to cushion the recordings.

I prefer the nicer equipment but I switch back and forth between iPhone and “real” stuff.

How much did your detailed approach to storyboarding define the structure and content of the final film? What was your process through the stage of production?

I stayed true to the boards for the most part, and began animating scenes non-sequentially over time. Pre-production methods like storyboarding and animatics were things I had not used before. Production took place over the 5 or 6 months I was working on it, but at the same time I was placing the clips into Premiere and editing them. So production and post-production were eclipsing one another a lot of the time, which I think is another benefit of animation.

Colour and camera movement play important roles in building the tone, atmosphere, and style of Help! Dying!. How did you go about developing these interconnected elements?

With the color palette I wanted to give the film a mysterious, dark, crime-thriller, look. At the moment, I enjoy very plain colors that aren’t trying jump out at people. It is more comfortable for me to look at, and I think there’s honesty in its blandness. Camera-movement within 2-D animation was something I was really trying to get a handle on in this film. This goes along with wanting the finished product to seem like a crime-film, and attempting to do what live-action does in 2-D. These live-action techniques were difficult and look strange in animation, but I think that is what I like about it.

Are there any other rules, methods or formulas you followed to ensure your films makes sense and flow as they should?

Not really. This film in particular was pretty all over the place because I had been working on it for a longer period of time than other projects. I had a rough idea of what I wanted it to be, but none of it made much sense until I added the audio, which was the final step for this one.

How has your time at CalArts helped you to develop as an animator?

A great deal! I originally came to CalArts in the Art program, mostly illustrating comics. I took a few animation classes in my first year, and really took to it. Now I am an Art/Animation major, which feels like a better fit.

What’s the best piece of advice you could give someone about to embark on their first animation? Who has influenced you throughout your animation journey?

I would say don’t get too bogged down in the fluidity of movement, unless that’s your single aspiration. Animation is a great vehicle to get ideas across quickly, and I find my favorite animations are extremely limited in execution. People like Mike Judge, Don Hertzfeld, Takashi TaniGuchi, etc. All have amazing ideas, and then use the most reduced forms of animation to show them as fast as possible. I would like to try to increase that limitation in the future and see where it goes from there.

I should be putting up a new short in a week or two, depending how quickly I can finish the sound. Hope you enjoy it!