Chloë Wicks deconstructs modern masculinity in her tragicomedy 'Fragile Package', about a couple who move into a new apartment and discover a gun.

As a young couple move-in to a new apartment, the relationship between them becomes frazzled when Lou discovers that Sam has been hiding a gun from her. Fragile Package, Chloë Wicks’ collaboration with Writer/Actor Sam Baron is a brilliant evisceration of modern masculinity and the neuroses of lockdown. It’s a short film with a wonderful looseness to it. Small moments of Sam and Lou’s relationship are revealed as the couple bicker, and as Sam’s hidden insecurities are slowly laid bare through subtle mentions and gestures, the couple’s demise comes into question. The film was created from start to finish, only a few months ago, as Wicks and Baron wanted to make something on the fly that captured the stifling nature of lockdown. After speaking with Wicks recently about her close quarters horror short Cubicle, DN caught up with the director again to chat about the swift nature of Fragile Package’s development and the joys of shooting a film with total freedom.

Similarly to Cubicle, I really enjoyed how contained this story was, and how it all takes place essentially in one room. How did it come about as a project?

The idea for this film came from wanting to do something creative in the often stifling environment of lockdown. Sam Baron, the co-writer and actor of the film, and I are good friends, and we’ve often helped each other in our separate projects, giving feedback on scripts and so on. Sam is usually a director as well but has done a lot of improv over the last few years, and he was keen to act in something to experience that side of the coin, understanding what actors have to think about and seeing how it felt to be directed by someone else – hopefully I haven’t put him off acting for life! We came up with this short for us to write and produce together, for him to act in, with me to direct and edit. We wanted to make a film that would be personal to both of us, but also have a genre element that would shape the story in unsettling ways.

It felt like a chance to explore some interesting, current questions around masculinity and the erosion of trust in a relationship.

How did you fall upon the idea of a couple arguing over the possession of a gun?

We got excited by the idea of a couple in London who find their relationship unravelling on the day they’re moving into a new house when the girlfriend finds a gun hidden amongst her boyfriend’s stuff. It felt like a chance to explore some interesting, current questions around masculinity and the erosion of trust in a relationship, and we liked the mix of tragicomedy and high-stakes tension it could give us. It also immediately felt like the story blended our tastes and previous work – Sam’s comedy instincts and my genre interests – as well as giving us the chance to try something we hadn’t before; at my end, directing something more comedic and on Sam’s side, getting to act.

How did you both find translating the concept from idea to script?

Initially we wrote up a detailed outline, not a script, thinking we would explore a semi-improvised process, having been inspired by the Duplass Brothers when we first started talking about what we’d like to try making. But it soon became clear that a more conventional script that the actors could learn was needed, as the rapid-fire dialogue and dynamic shooting style meant we needed to keep some semblance of continuity, otherwise it would never have cut together. This last-minute scripting was actually great because it meant the dialogue never had a chance to get stale – we were still settling into it during the shoot, which gave us the naturalism we wanted. A friend of mine Louise Kempton – a brilliant actress-turned-intimacy-coordinator – played the role opposite Sam. Making it among friends meant we were all individually able to bring something personal to the story, as well as giving us the trust and confidence to be honest about what needed tweaking in the script at any given point.

Did that intimacy have other benefits? For example, when it came to crewing the film and getting it going as a production.

We were lucky because we knew from the get-go that this was going to be a small, intimate shoot with just a handful of crew. We didn’t have to change our plans and make it radically smaller to suit the pandemic because the idea was conceived in September 2020 and we shot it seven weeks later, with just us, the DoP Alistair Little, a focus puller and a sound recordist. Practically it was a big challenge at certain moments because we often felt like we never had enough hands or eyes, but at other times it was great being able to be lighter on our feet and do more takes to focus on performance. 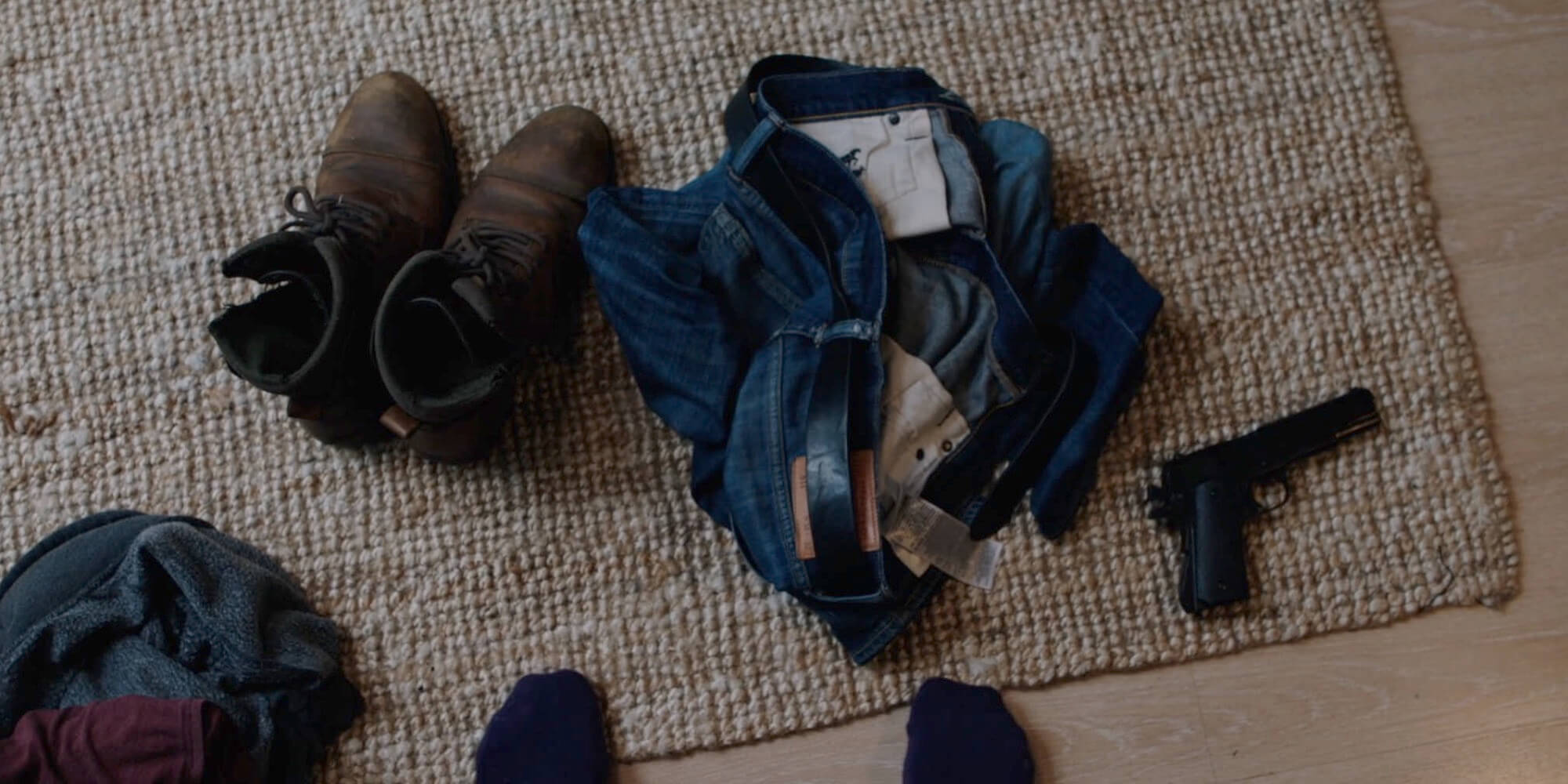 It’s a pretty talky film which must’ve been a challenge for Sam and Louise! Did you have time for much rehearsal or was it a case of hitting the ground running?

We rehearsed beforehand, which was essential given so much of the film is continuous and set within one space – more like a play in that sense. The brilliant DoP Alistair Little, who I’ve worked with a few times now, did amazing work with limited resources. Without any budget, the style of the film was never going to be able to rely too much on beautiful or distinctive visuals; instead we focused on making the blocking as dynamic as possible and having the camera try to reflect some of the stress the characters are feeling.

The story is rooted in an anxious, introverted headspace that feels linked to this past year of lockdown.

The score reminded me of Birdman with its distinct minimalism and rhythmic elements. How did you end up developing it?

Perhaps as a result of budget/location/lighting restrictions during the shoot, it felt like music could be an opportunity to do something more distinctive than perhaps we were able to do visually. I think drums are so interesting because they lack pitch or chord, which is the thing that tells us what to feel – a minor chord feels sad, a major feels happier. So with drums, it feels like you’re in some sense making the audience wait – there’s a suspended, blunt quality to it that can sit in that space between comedy, drama and thriller. The Composer Roly Witherow took this idea and ran with it brilliantly. You don’t want to impose something that doesn’t feel organic to the film, so in the end we scattered some double bass and piano over the drums at one or two key points to help create a slightly warmer tone.

Given its quick turnaround and release, how do you feel looking back on the process of making Fragile Package and finished product?

The story is rooted in an anxious, introverted headspace that feels linked to this past year of lockdown. So whilst watching it on a cinema screen at some point would be fantastic, releasing it online as soon as we’d finished felt more in the spirit of the quick, fun atmosphere in which we made it, rather than adding a year onto that with a potential festival run. It was great to make something purely for the sake of making it, and the freedom of the process meant we could try out new things we’d been curious about. I think we both look at the finished film as an effective blend of our individual creative voices, which creates something new in the combination, and which has the fingerprints of our other key collaborators all over it.

Finally, what can expect from you and Sam in the future?

I’m currently in prep directing a standalone drama for Channel 4’s On the Edge series. Also working on two features and a six part thriller for Sky. Sam is currently gearing up to direct his first feature and creating original TV shows for DNA Films and New Pictures.

Directors Notes is honoured to present the premiere of Fragile Package on our pages today. If you would like to join the filmmakers sporting a fetching DN Premiere Laurel, submit your film now.