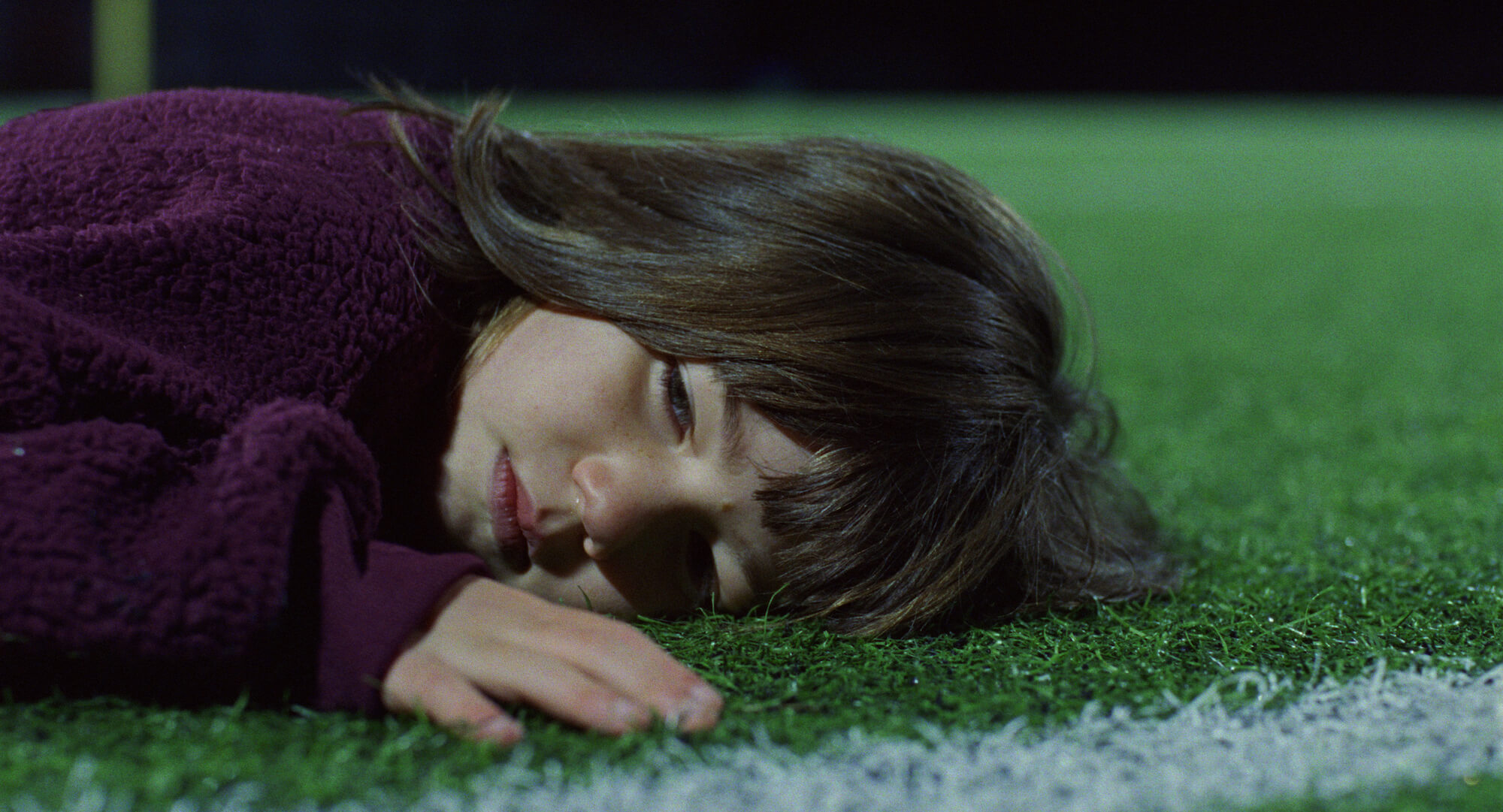 Sit Still from Vincent René-Lortie (last seen on DN here) is set amongst an eerily vacated school and centres on a young girl who expresses herself through the street dance style Krump. Made as part of the Films.Dance project – which recently brought us the the emotional journey of a disabled dancer in Toke – it’s a humbling look at the inner frustrations of a seven year old which the director cleverly juxtaposes with a score by Alaskan Tapes, undercutting the traditionally fast-paced, beat-centric music that usually accompanies Krump for a more slowed and reflective outlook. The all encompassing result is an uplifting acknowledgement of the underestimated power of childhood expression. DN spoke with René-Lortie about the methods used to work with his young protagonist, collaborating at a distance with Alaskan Tapes and shooting on 35mm.

How did this collaboration and concept of expressed frustration come about?

It was the kind of discussion and process where it all felt really natural. When Jacob Jonas offered me the opportunity to collaborate with him, there was already a dancer, Adeline Kerry Cruz, and a choreographer, Russel “Gutta” Ferguson, involved in the project. Nothing had been created yet. I had to come up with a concept, which honestly didn’t take long. I was listening to the music of Alaskan Tapes, an artist I already liked a lot, and it all immediately made sense to me.

I wanted to make a film about the frustration children can feel when they are not listened to. Young people think and see the world differently than adults. We often believe we are more evolved, more intelligent, and sometimes dismiss feelings and ideas that children are trying to communicate to us. That’s why I came up with the idea that except for the dance, everything in that film would look, sound and feel as still as possible. By accomplishing this, all of our attention would then be put on Addie’s performance. No matter how old or tall she is, it forces the viewer to really listen to what she has to say.

There seems to be a structure to it all too, with how she progresses with her performance throughout the film.

Even though it was an abstract dance film, it was important for me to find a narrative structure that would lead the audience through different emotions. Creating this with Adeline and Russell was the most special thing about this project. Because the young dancer was seven, we couldn’t create a complex choreography from start to finish. Russell really worked with her on particular movements, and also on her body language.

What conversations were happening between yourself, Russell and Adeline at that stage?

We worked on the emotions. It’s funny how sharing feelings for a child is much simpler and straightforward than for an adult. A lot of our rehearsals were about discussing those emotions. We were talking about her experience at school, about bullying, being different, being happy or sad. And then, together, we found ways and tools to express these emotions. One of them, the one we used the most, was that we played music that represented those feelings. And the rest was done deal. She improvised throughout the whole shooting day, and I knew where and when I needed one particular emotion.

I came up with the idea that except for the dance, everything in that film would look, sound and feel as still as possible.

And let’s not forget that Adeline also wrote, composed and sang the song that you can hear at the beginning of the film! And she is also the artist behind all the handwriting titles. Incredible, isn’t she?

When it came to shooting, what equipment did you end up using to capture Adeline?

The project was shot on 35mm, with an Arri 435, on Kodak 5219. We were really lucky to be able to shoot on film. By pure chance, I was doing another project a few days earlier, also on film, so we decided to mix it all up. We were really limited in the number of takes we could shoot, I think we only had 35 minutes! So we practiced each shot before shooting it, and we limited the number of minutes per location. After all, we could also have shot digitally for the same price, but in those kinds of places we were filming, it just felt natural to do it on film, especially because of the ambient lights and the organic side that this image gives us.

How did you find piecing all these ideas and shots together in post, given that you already had the song in place?

Half of the magic happened on set, but the other half also happened in post production. As I mentioned earlier, my idea came when I was listening to Alaskan Tapes, and we were very lucky to be able to count him on the team afterwards. He sent us three songs before the shoot to inspire us, and when we got into editing we picked one of the three. Brady Kendall, from Alaskan Tapes, then made several changes until the very end, by following our editing versions. Everything about it was natural, fluid, which made me very happy because we didn’t know each other before!

Did you work with anyone else in post to help shape the sensibility of Sit Still?

Another amazing, and new, collaborator was Theo Porcet, who did all of the sound design for the film, from scratch. There’s actually a funny video that we can find on his Instagram where we see him dancing with different types of clothing to recreate all of Adeline’s gestures. He really did an amazing job. I think the sound adds a wonderful layer of sensibility to this film, it helps to understand the protagonist, it directs her voice and the message within.

Half of the magic happened on set, but the other half also happened in post production.

And last but not least, my longtime collaborator Brittney Canda, with whom I have co-directed and worked on several films, edited this project. Brittney is a dancer and choreographer. She has a really special connection to dance that I personally don’t have, so it made total sense to work with her on this film. Her understanding of the movements within a story is incredible and allows us to experience emotions fully.

Now that the film is out there, how do you feel looking back on creating it?

I believe this film has been one of the smoothest working experiences I have had so far. Jacob gave me a lot of creative freedom, and it was a real pleasure to work with him and his team. Above all, I must mention the incredible parents of Adeline, Francisco and Mandy Cruz. who were present from the beginning to the end of the project, and who contributed immensely to the creative success of this film.

And finally, what’re you working on now?

I’ve been working for several months on a film which deals with a character evolving in a juvenile center where I come from, in Quebec. We’re shooting it at the start of the summer and that’s mostly what I’ll be doing between now and then!

Sit Still is one of the many great projects shared with the Directors Notes Programmers through our submissions process. If you’d like to join them submit your film.